Then we lived healthy ever after

Then we lived happily ever after…
There was a time when my husband was physically very active be it swimming, going for walks, playing tennis or going for a jog he did it all. However after marriage as our life progressed he slowly took up a more sedentary lifestyle. With the passage of time the effect of this sedentary lifestyle bagan to show its effect as he started getting more and more busy with his professional life and had less and less time for his personal and sporty life. Slowly his well toned abs were giving way to a paunch and from a slim and trim dude he was growing into a middle aged man with a pot belly and his passion for sports and fitness was being replaced by his passion for food. Everyday he would ask me to prepare a new dish of his choice and as a dutiful wife I would carry out the cooking to suit hism palate and liking. Even though I felt that his indulgences in oily and fried foods were adding to the pounds he was piling up and his couch potato life style only added to the flab that he was accumulating so fast.
Then one day visiting the tailor with him I realized his waistline had outgrown his broad chest considerably and perhaps this was the cause of his lethargy and getting tired so frequently.
I visited the site www.saffolalife.com and asked my husband to input his details and take the free online Weight-Heart Test

This test did a quick check on his BMI by putting in his height, weight and waist details. I realised his BMI was considerably higher then what it should be and this was putting him at great risk. 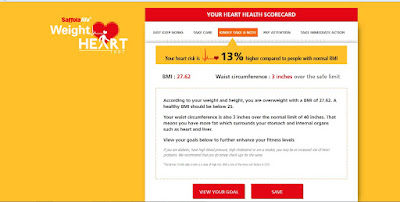 I wanted my husband back and so I started desperately thinking of getting him in to shape.I followed the instructions on the site and got to know about a diet plan and a walk plan that was detailed on the site.

I talked to him about the issue and he agreed that lack of exercise and a sedentary lifestyle were adding to his lack of fitness. I am cooking the food for him following the diet plan prescribed on the site. Looking at his condition I have realized the importance of good health so even I took the test on the site and am now following the instructions.
He tried beginning to exercise and going for walks but the inertia of a laid back lifestyle was too much for him to break. He tried a couple of times but could not get to follow a regular walk or fitness regime.
Our anniversary was just around the corner and as a gift for my husband I got him a puppy. The little pup is very active and as a result my husband is always on the move literally running around him. He has started going for  walks in the morning and evenings even though on a pretext of taking the pup of a walk. I have started accompanying him for 30 minute walks and every day we try to go further. Then we go to the park and exercise. While coming back home we take the stairs instead of the lift. Often we have a race to our second floor flat. I have promised him the day he beats me in this race I will give him the gift of his choice. He wants that I should start wearing western outfits and his part of the deal is that the day he gets back to his old fitter self and beat me in this race he would get the desired gift. This is the incentive that keeps him going. Together we are looking after each other and ourselves and progressing on the road to #ProtectHerHeart and live healthy ever after.

I am joining the Saffolalife #ProtectHerHeart initiative and pledging my support to better heart health in Association with BlogAdda.